Consequences of shear in oil-water stream

Typhonix has established Low Shear production philosophy, which is cleaner production through low shear process solutions. Rather than challenging the effects that emulsions create, we focus on the causes to their formation. High shear forces are one of the necessary elements in the process of creating emulsions. The characteristic feature of the equipment developed by Typhonix is the ability to reduce shear forces acting on the fluids, thus diminishing the emulsion formation. Presence of emulsions in the production flow creates significant challenges for the operator. With minimal upgrading of the existing facilities, Typhonix equipment makes oil production cleaner and more efficient, thus bringing value for the operator.

Generally, during the oil production, there is a time when water starts to be produced together with the crude oil. There are two primary sources of produced water: 1) water brine originally present in the reservoir rock, and 2) water that has been injected into the reservoir during secondary and tertiary recovery methods. Produced water has no value for the operator. It creates several problems, such as need for water treatment facilities, possibility of corrosion, scaling, etc. Water flowing from the reservoir can be in the form of “free” water, which will separate readily, or it can create emulsions together with the produced oil. Wellstream from the reservoir normally contains oil, free water, and emulsions of oil and water. The operators must make sure that the crude oil comply with certain product specifications, mainly related to the amount of basic sediments and water (BS&W), and salt, before they forward the product to the transport system.  Due to the production specifications, the water, both free and in the form of an emulsion, must be separated. The traditional separation equipment splits the production stream into a water leg and an oil leg. Gravity separators easily remove the free water, but emulsions can be difficult to treat. Treating the emulsions usually involves adding heat and chemicals to the separation facilities. Including these components represents significant investments in energy, equipment, and chemicals. The operators are required to treat both water-in-oil emulsions present in crude oil and oil-in-water emulsions present in produced water. Operators are also obliged to follow strict governmental regulations regarding the discharges of oil into the environment (For more information about the requirements: www.ospar.org). Therefore, paying attention to the treatment of oil-in-water emulsions in produced water leg must be prioritized.

First, crude oil and water must encounter each other to form an emulsion. Then, two additional elements must be present: 1) sufficient mixing and 2) emulsifying agents, which stabilize emulsions. There are many sources of mixing during the fluid’s flow from the reservoir to the production facilities. The intensity of the mixing describes the amount of shear encountered by the flow. Examples of shearing enviroments are narrowing radii, valves, pumps and abrupt pressure changes. Intense mixing creates high shear forces, which make droplets tiny, and thus creates tight emulsions.

From a theoretical point of view, all emulsions are unstable systems because there is a natural tendency for immiscible fluids to separate. However, many emulsions can remain stable over a long time. Therefore, these long-lasting emulsions are called stable emulsions. The stability is owed to the presence of emulsifying agents such as surface-active agents (surfactants) and finely divided solids. Surface-active agents possess partial solubility in both oil and water, and tend to concentrate at the oil-water interface where the interfacial film is formed. The emulsifying agents arrange themselves between two phases depending on their chemistry. Surfactants contain both a hydrophilic polar group, which is called polar head and a hydrophobic (lipophilic) non-polar group, which is called non-polar tail. Hydrophilic/lipophilic balance (HLB) is the ratio of the molecular mass of the hydrophilic portion of surfactant molecule to the molecular mass of the whole molecule. Surfactants with low HLB will promote the formation of water-in-oil emulsions, while surfactants with high HLB – the formation of of oil-in-water emulsions. The accumulation of surfactants at the interface results in the formation of a rigid film. Shear forces introduced to the fluid mixture stimulate the aggregation of these agents on the interfacial surfaces of the fluid phases. When a rigid film is formed, it acts as a barrier against droplet coalescence, and prevents the separation of the phases, maintaining stable emulsions. Fatty acids, fatty alcohols, and fatty amines are typical examples of bipolar molecules that become surface-active agents during the emulsion formation. 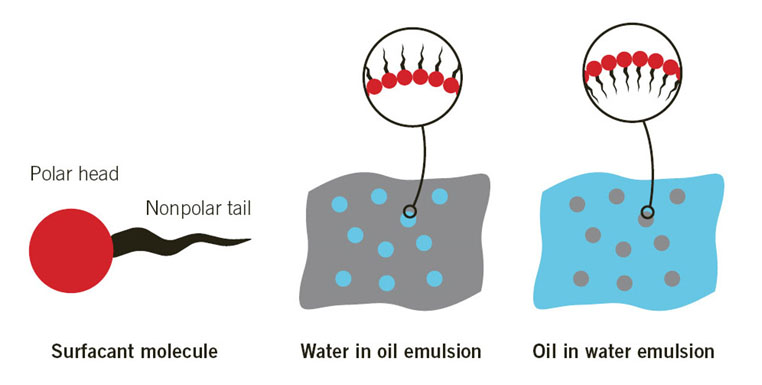 Figure 1: Surfactants arrangement in different types of emulsions.
Another type of emulsion stabilizers present in production stream are finely divided solids. These particles must be much smaller than the emulsion structures to act as mechanical stabilizers. The particles arrange themselves at the phase interface where they are wetted by both oil and water. The stabilizing ability of these solids depends on the material wettability and particle size. Origins of these solids include clay particles, sand, products of corrosion and particles from the drilling mud. 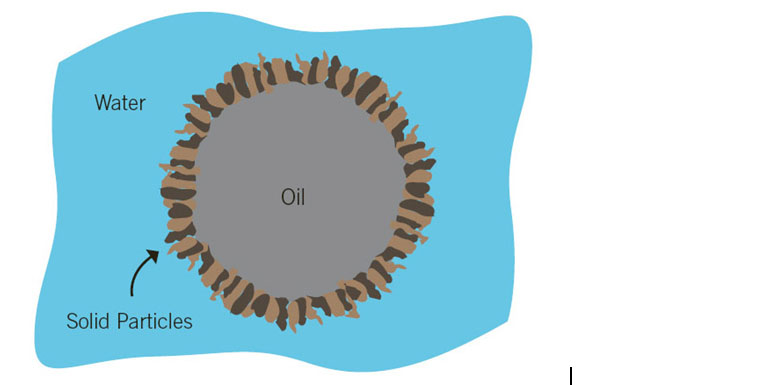 Following are the examples of the processes where emulsions create challenges, which operators must handle.

As mentioned above, operators must separate oil from water before they can send oil to refineries. Separating emulsions requires equipment, chemicals, and procedures. The use of chemicals introduces induces costs in the form of specialized equipment, transportation, ongoing consumption of chemicals itself, and costs associated with removal of chemicals from produced water after the separation process and prior water disposal. The drawbacks of chemical usage escalate in harsh environmental conditions. Examples of such enviroments are cold climate, or in an offshore installation, where weight and footprint is a major concern.

Chemicals must be introduced to the crude oil stream as early as possible, preferably downhole of the well to effectively reduce emulsion formation. However this approach has some flaws. Firstly, the ability to inject chemicals into the well requires significant capital and operational expenses. Secondly, high shear forces, cooling, and pressure drops during the fluid flow to the process facilities may sporadically cause new emulsion formation, thus diminishing the effect of chemicals.

Oil-water emulsions exhibit non-Newtonian behavior and typically have higher apparent viscosity than either of the oil and water phases alone. The viscosity of very stable oil-water emulsion can be hundreds and thousands of times more than the viscosity of separate oil and water phases. Increased viscosity creates high pressure drops in the flow lines. The high pressure drops lead to additional investments to reestablish the necessary pressure in the transport system.

The presences of water in the oil stream during the pipeline transport from the production facilities to refineries have a potential to cause the corrosion and scaling formation issues. The consequence of these processes has an enormous impact on the pipeline.

Using chemicals is the most common method of emulsion treatment. Typical emulsion treatment chemicals are the blend of solvents, surface-active ingredients, and flocculants. The solvent components may be benzene, toluene, xylene and heavy aromatic haphtha. These solvents target the emulsifying agents and neutralize their stabilizing effect. Some of these chemicals carry over with produced water stream, which is disposed into the environment or is reinjected into the reservoir. The dissolved compounds like benzene, toluene, and xylene rise new environmental concerns when are discharged together with the produced water.