There is a large potential for cost reductions by optimizing the polymer injection system, without compromising footprint or flexibility.
Compared to pumps and other standard flow control devices, a low shear valve design can significantly reduce costs related to polymer consumption and other OPEX expenses.

Polymer flooding is a widely used EOR technique, used to extract immobile oil from a reservoir. One major challenge with polymers is that most EOR polymers are sensitive to shear degradation. If the polymer is degraded during injection, some of the EOR potential is lost. The most commonly used methods to compensate for viscosity loss during injection will increase OPEX. Therefore, a more cost effective approach is to use injection system components that result in low mechanical degradation. 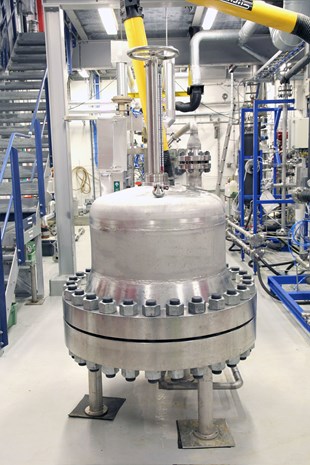 Together with Total, Vår Energi, Equinor and OMV, Typhonix has developed a low shear valve for injection of polymer. Typhonix Polymer Flooding Valve is a compact and flexible valve, which maintains the viscosity of the polymer solution during injection.
Compact design compared to coil based solutions:
Full controllability:
Fully customizable:
System and process benefits:
The valve consists of flow channels with optimized geometry, gently throttling the polymer flow. The flow channels are arranged to allow for a compact design. The flow regulation principle of the low shear valve is the same as that of conventional plug-cage valves, allowing for full controllability without affecting the low shear performance. The geometry of the channels is a design factor, meaning that the valve can be designed according to each specific application. The valve can be used in both diluted and high concentration polymer applications.

In the diluted polymer injection scheme, conventional valves often generate high shear during injection. The high shear rate results in reduced sweep efficiency in the reservoir, unless compensated by either 1) using a more expensive and shear stable polymer to reduce degradation, or 2) increasing the polymer concentration to compensate for the viscosity loss.

Typhonix Polymer Flooding Valve can be used to replace the standard valves, to reduce the shear. Results from the prototype test in a diluted application, shows that the standard valve resulted in 35% to 60% viscosity degradation. Typhonix Polymer Flooding Valve resulted in 1% to 10% viscosity degradation under the same conditions.

For some applications, using Typhonix Polymer Flooding Valve instead of a standard valve can reduce OPEX with $500*) per well, every day. This is because a 25% more expensive polymer is needed to compensate for the high shear of the standard valve. 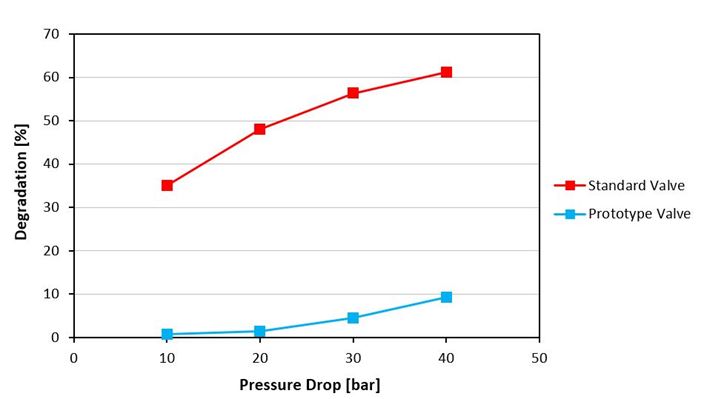 In the mother-solution injection scheme, one polymer injection pump is installed on each well to enable tailored viscosities. The injection system avoids viscosity loss by injecting a high concentration polymer solution downstream of the choke valve. However, one drawback of this setup is that maintenance and energy demands are usually higher than for a valve-based scheme.
Generally, when using Typhonix Polymer Flooding Valve in the mother-solution application, the one-pump-per-well injection scheme is replaced with a larger central pumping station plus one low shear valve per well to control the polymer injection rate. In this case, the low shear valve has the same low shear performance as the positive displacement pumps. However, compared to the one-pump-per-well scheme, the central pumping station and low share valves will result in significantly lower maintenance costs and an overall lower energy consumption.

Discover the potential on your asset

The commercial version of Typhonix Polymer Flooding Valve is scheduled to be ready within 2021. Do not hesitate to contact Project Manager Mari Stokka to discuss the potential of this technology on your asset. 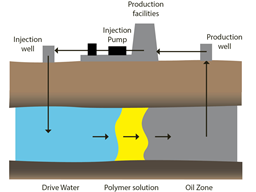 Mechanical degradation of polymers is a well-known technical challenge in the petroleum industry. Polyacrylamide molecules are very long flexible chain molecules that are broken when submitted to high shear rates.