The majority of process valves can be divided into two types of applications: Isolation valves and control valves. Isolation valves have two positions of operation: Open and closed. They cause minimal or no disturbance to the flow passing through.

Control valves are designed to regulate the process specific parameters, such as flow rate, pressure drop, temperature and liquid level. Control valves resemble an orifice of some sort, which can change the opening depending on a signal from a controller. Fluid flow, passing through the restriction, experience intense turbulence and variations in pressure drop and flow velocities.

In the case when two or more immiscible liquids are present in the multiphase flow, the turbulence will stimulate the mixing. High intensity turbulence will lead to shearing of the liquid phases and the creation of an emulsion. An important characteristic of an emulsion is the droplet size distribution of the dispersed phase. The dispersed droplets vary in size and are usually spread in the range from 1 to 1000 µm.  A common correlation is that the higher the mixing intensity, the greater the shearing, and the smaller the average droplet size of the dispersed phase. Emulsions can be classified as tight, medium or loose emulsions, following the increased average droplet size from smallest to largest.
Emulsions are undesired, but a commonly unavoidable phenomena during multiphase flow in a process plant. Large gravity-based separators are commonly used to separate mixed fluids into clean phases. Separation occurs by droplets from the dispersed phase travelling through the continuous phase to the phase interphase. The efficiency of gravity separators strongly depends on the droplet sizes of the dispersed phase as can be seen from Stokes’ law, describing the droplet maximum vertical (settling) velocity.

Hinze (1955) has described the shearing effect in the turbulent flow by formulating the maximum sustainable droplet size as a function of flow and fluid conditions:

For the flow through a control valve ε defines as:

In a given system, the process determines flow rate, pressure and the fluid density. Therefore, the only parameter that can be used to decrease the energy dissipation rate is the volume involved in dissipating the required energy.

Utilization of the hydrocyclone principle in a control valve increases the volume at which pressure drop occur. A swirl motion, similar to one that is established in the hydrocyclone, is induced in the fluid flow downstream the pressure-reducing element (globe or cage). In conventional control valves most of the pressure reduction occurs within the restriction itself. This is due to high velocity acceleration of the fluid during the flow through the restriction and following strong deceleration right after. The swirl motion in the cyclonic valve leads to maintaining the higher fluid velocities created by the flow through the restrictions. In addition, conical shape of valve’s downstream volume accelerates the fluids further in a spiral direction, thereby contributing to the pressure decrease. The cyclonic valve’s geometry utilizes the conical volume downstream the restriction in addition to the volume of restriction itself used for pressure reduction.
To enable the low shear operation, the following changes are implemented to the conventional valve (Fig. 1.):
According to Eq. 2 and Eq. 3 this would lead to lower energy dissipation rate, and bigger maximum droplet diameter respectively. 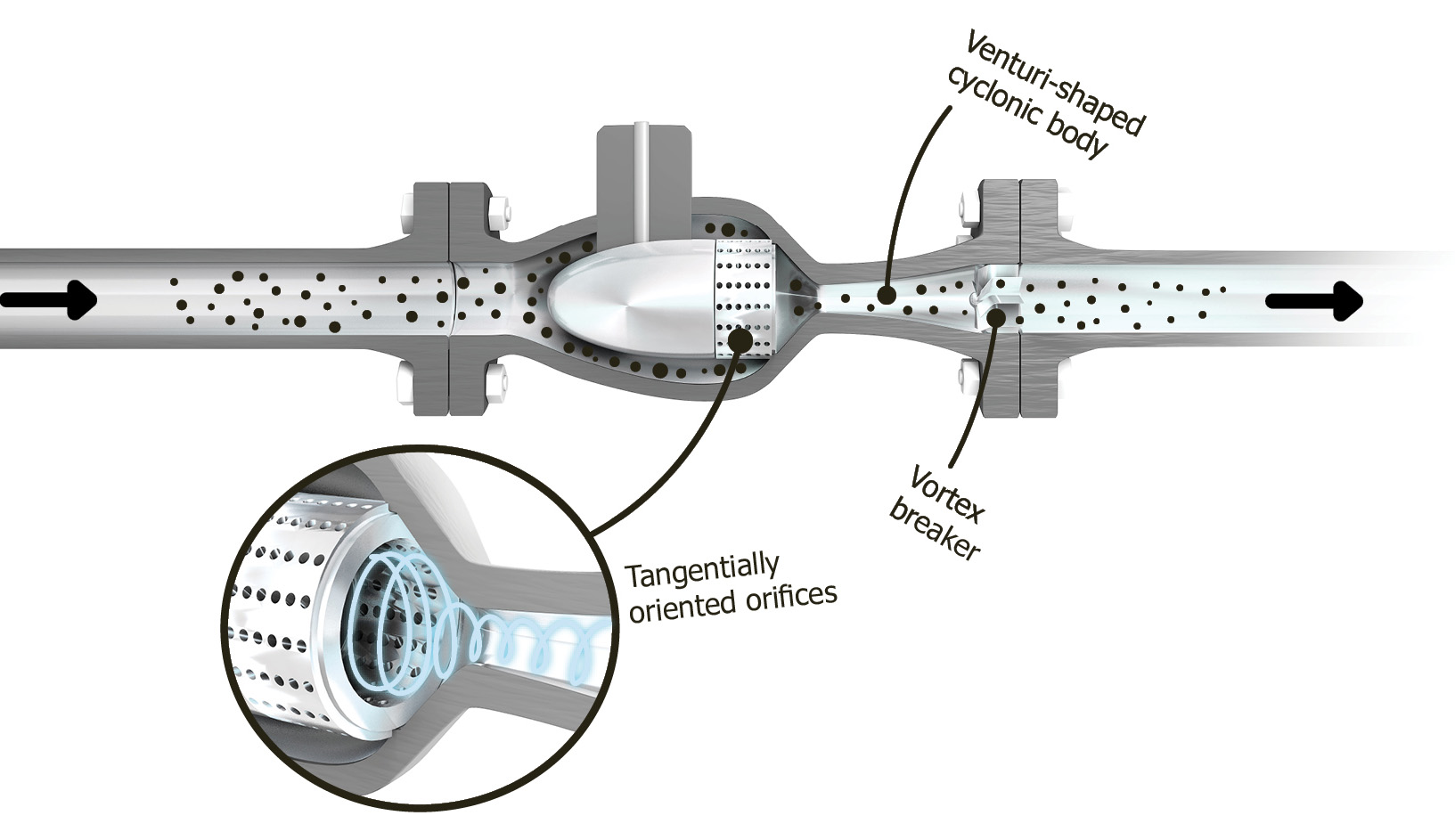 Gravity based separation efficiency depends on average droplet size of the dispersed phase, retention time of the fluid in the separator and the density difference of the dispersed and continuous phases. The degree of emulsification created by choke and control valves, affects the average droplet size. The tighter the emulsion, the longer it takes to separate fluid phases. The representative parameters for oil-water separator performance would be oil-in-water (OiW) and water-in-oil (WiO) concentrations for the respective outlet streams.

Fig. 2. shows the relevance of retention time on water quality in gravity separation for emulsions created by a standard control valve and by a low shear valve. The implementation of a low shear valve in the process system results in less emulsified flow. This would lead to higher separation rate according to Eq. 1. 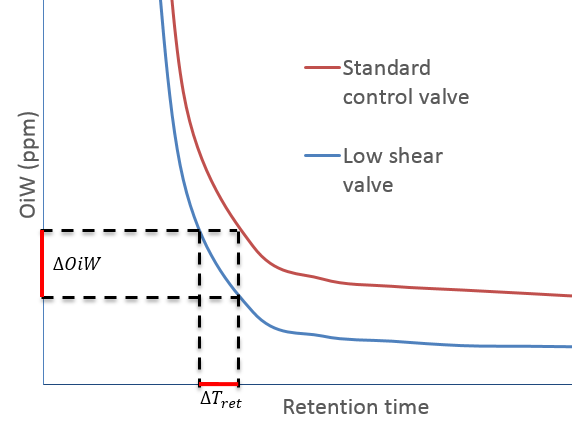 Figure 2. — Relation between water quality vs. retention time in gravity based separator for emulsions created by a standard control valve and by a low shear valve (representative estimate).
As can be seen from the graph, it is rather difficult to achieve complete separation. Certain amount of the dispersed phase is not possible to separate within the reasonable time frame due to presence of emulsified agents and other factors.

The replacement of a standard control valve with a low shear valve would allow following changes according to Fig. 1:
In the first case, higher volume of process stream would be separated in the same time interval, thus increasing the separator capacity. In the second case, improved water quality may lead to reduction in the number of produced water treatment stages, or higher water treatment plant capacity due to less polluted water.